My traveling friends of 3 Continents


I met Marianne and Marco while I was traveling with my parents towards the beginning of the 2 weeks trip to Indonesia, specifically Java and Bali in December, 2012.  This was a special trip for both me and my parents, as I had never been to the Pacific Rim or Asia, and this was this first trip to their homeland, so to speak, as this is where they were born and this visit would be their first since the left the country as teenagers.  Although I was born in the Netherlands and we have lived in the United States since the mid-1960’s, we were all excited about this trip, as it would truly be an exercise in both revisitng and recollecting old memories for them and new discovery for me.
After a few days in Jakarta, we had a driver take us to Bandung, where we stayed overnight, and then picked up a panoramic train ride to Kutoarjo.  We sat across the aisle and behind Marianne and Marco, and I just noticed when I reviewed the video of that moment, I see my Mom pointing to M&M and tell my Dad that they are “Hollanders.”  We had almost gotten on the wrong train initially, and my Mom asked Marianne and Marco if we were now on the correct train, and they kindly confirmed it.  And so began a 6-plus hour train ride making some new friends from our second homeland, so to speak, as my parent were married in NL and I was born there, specifically in Leiden. 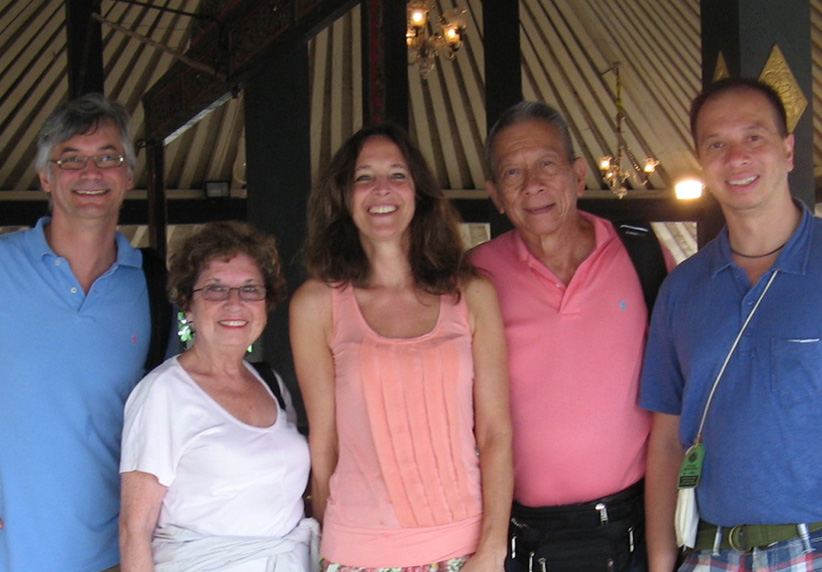 Over the ride, between enjoying breathtaking views of mountains, green valleys and rice fields, and subsequent photo-taking and video-recording, there were great conversations and the occasional nodding off to nap.  Although we got off at Kutoarjo , where our driver would pick us up to stay at a beautiful hotel at the base of the Borobudur, Marianne and Marco were to travel a little further to stay I believe in Yogyakarta.  At the stop, my Mom was grateful to have Marianne got off the train and help her off, as it was a good drop to the ground-level platform from the train.  As I was taking pictures and video at the station, the train pulled away with M&M waving to us goodbye.  At that moment, I thought it was a pity that we hadn’t exchanged contact information.
The next day, we explored the amazing Borobudur temple in the morning, and our driver drove us to Yogyakarta to explore the Sultan Palace, and who do we see on the grounds?  Marianne and Marco!

After touching base on what we did since meeting on the train, it was time for more picture taking and hugs, but most importantly, we exchanged contact information with our new friends before making our separate ways, ours to get a guided tour of the Palace.  Seeing each other again makes you think of destiny when it comes to establishing new friendships, and such a unique and beautiful trip.

Fast forward to March of the following year, when I found out in the weeks before that M&M would be traveling to New York, my home turf!  I believe that this would be Marco’s first trip to New York, but certainly not for Marianne.  Their impressions of our North American encounter on a previous blog entry here but I remember that I wanted to give them a unique NYC experience, and among the options I gave them was to meet on the Manhattan side of the Brooklyn Bridge and walk across it. 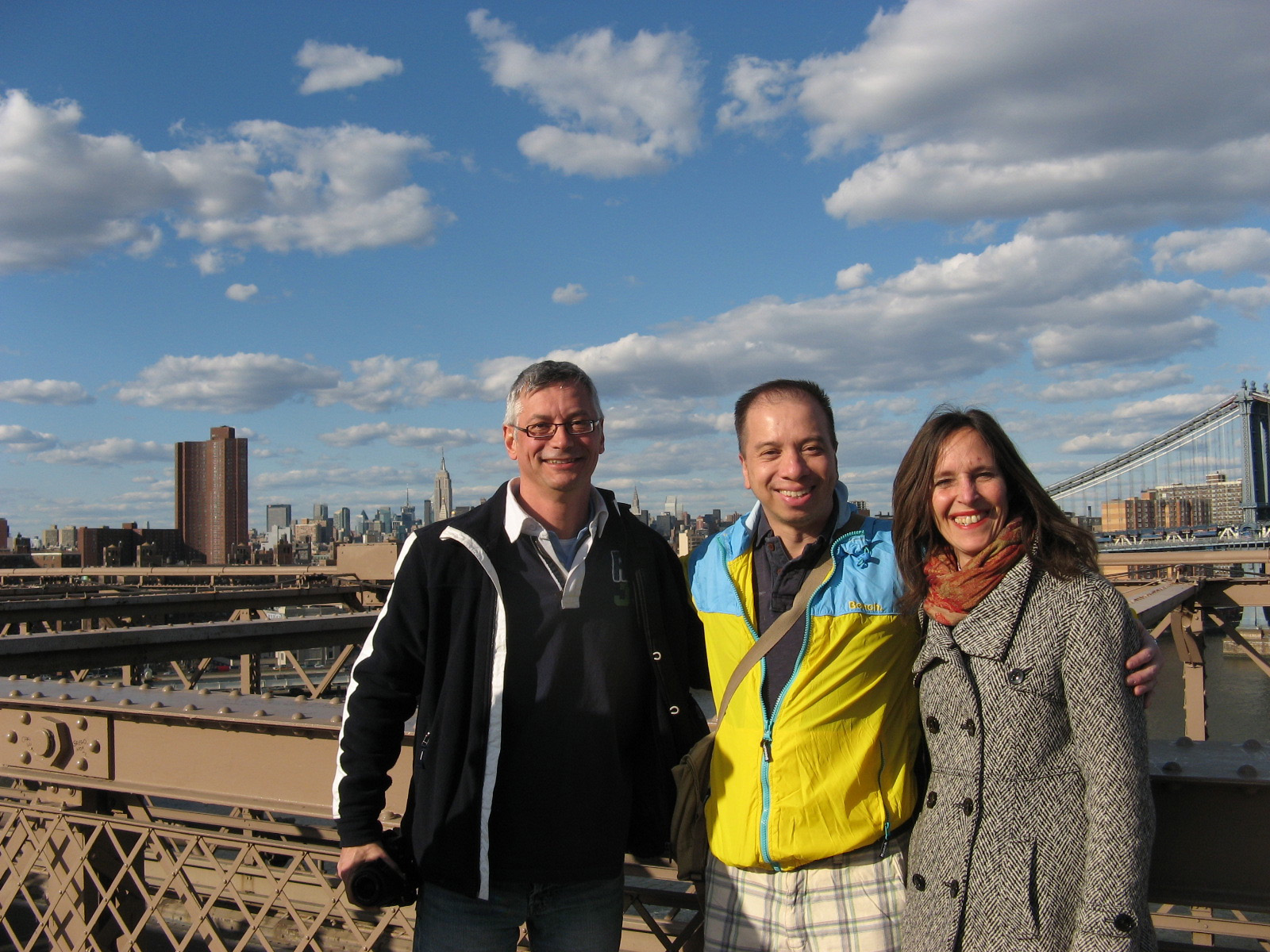 So on that rather cool and blustery day, we met up at the Park near City Hall and walked across the Bridge to Brooklyn.  I had looked up options on a place for dinner on the water in Brooklyn that could offer a nice view back to the City, and we were happy to find it at Alma.  Then capped off the night by taking a cab back into Manhattan and had a fun evening with the outrageous bartenders/singers at the very packed but legendary Cabaret and piano bar in Greenwich Village, The Duplex.  Although we were probably only together that late afternoon and evening for perhaps 6 hours, it was certainly jam-packed with lots to do, with typical New York characters and sights on the weekend evening, with imperfections, unique and sometimes direct perspectives, mixed with good food and arguable craziness and silliness.  Quite the opposite of what most New York tourists would see and experience.  I hope M&M aren’t scared to come back!

Finally, we can fast-forward  to the 3rd continent where I have met up with Marianne and Marco – Europa, and specifically Venice!  In September of last year (2013), I had decided to take a Mediterranean cruise by myself leaving from Barcelona, which would take me to places in Southern France, Italy, Greece, Montenegro and Croatia.  These were places I had always wanted to go, as previous visits to Europe were usually centered in the Netherlands, as of course I would be visiting my grandparents and our other relatives there.  As I just turned 50, I wanted to give myself the gift of Southern Europe ☺  I visited roughly 12 ports in 14 days, allowing just one day in each place.

Although it ended up being  a wonderful “survey” trip to get a small taste of what each port would be like, it obviously didn’t leave time to truly any one place in any depth.
During the cruise last year, I developed a true love of Italy, deciding to come back this year and focus more quality time in two cities, selecting Rome and Venice.  In mentioning this to Marco and Marianne, they expressed interest in meeting me in Venice, as neither of them had been there before.

At some point thereafter, I learned that I could take a side-trip to Switzerland, as I had reason to visit one of our business partner companies, at a conference that they were hosting in Zurich.  So I decided to start my trip in Venice, and in checking with Marianne and Marco, they would in fact be able to join me the day after I arrived in Venice in September of this year.

We would stay at the Hotel Gorizia “a La Valigia” not far from famed Piazza San Marco, a small boutique hotel with typical Venetian furniture and atmosphere.  The timing was perfect as I am always tired my first day in Europe after traveling from the States, but after a little bit of exploring Venice on my own on Day One, it was thrill to see my good friends from Schiedam coming down the staircase of the hotel to meet me in the lobby for dinner.  The first evening was probably typical touristic but must-do’s in Venice, having drinks at one of the cafes on Piazza San Marco (Caffe Florian), and a great Italian dinner on the Grand Canal, near the foot of the Rialto Bridge.

Day Two in Venice included a view of the Bridge of Sighs, a trip up to the Campanile (tower), a ride on the Grand Canal on the public bus (which I try to overly pronounce correctly, the Vaparetto)! 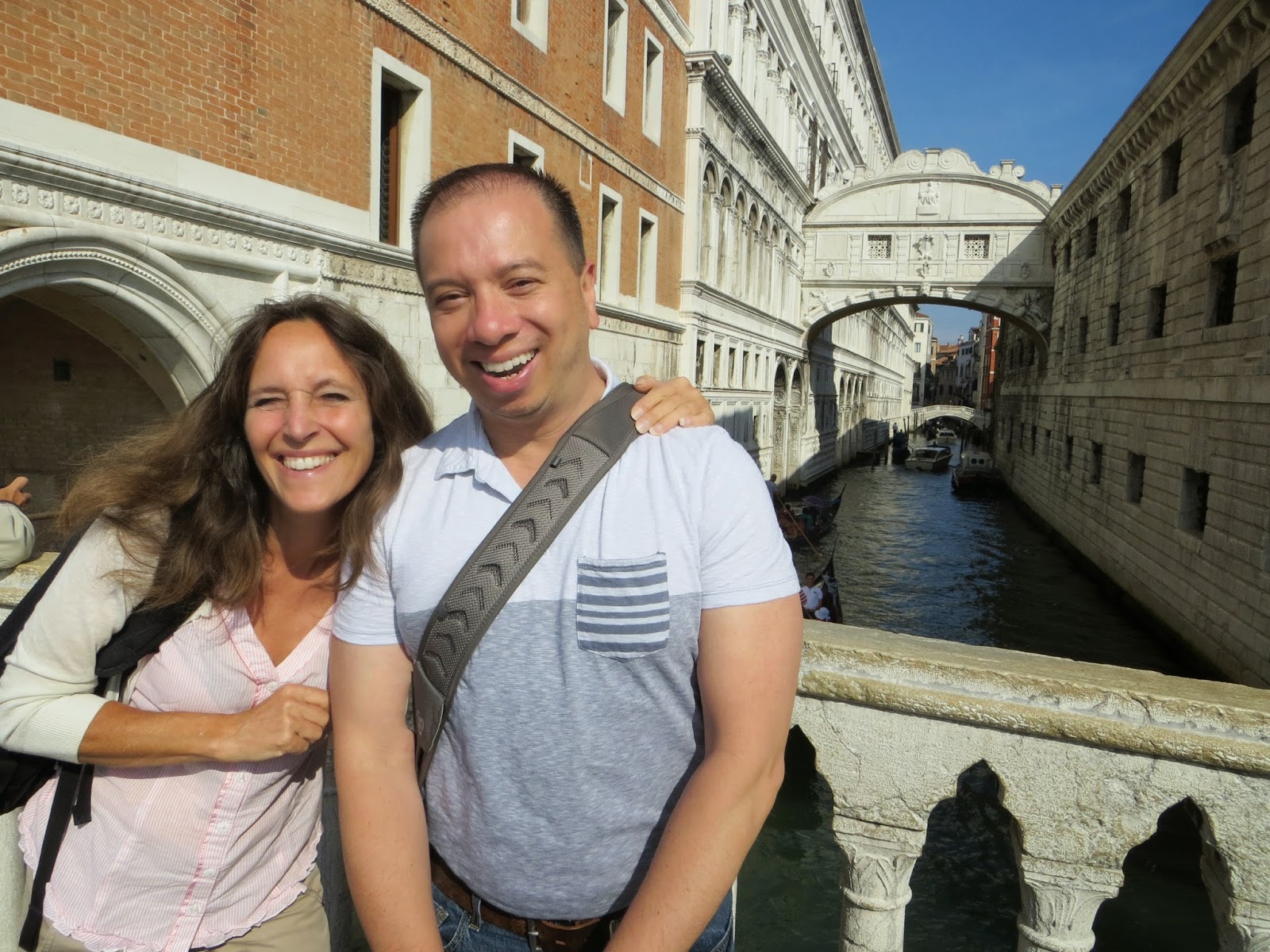 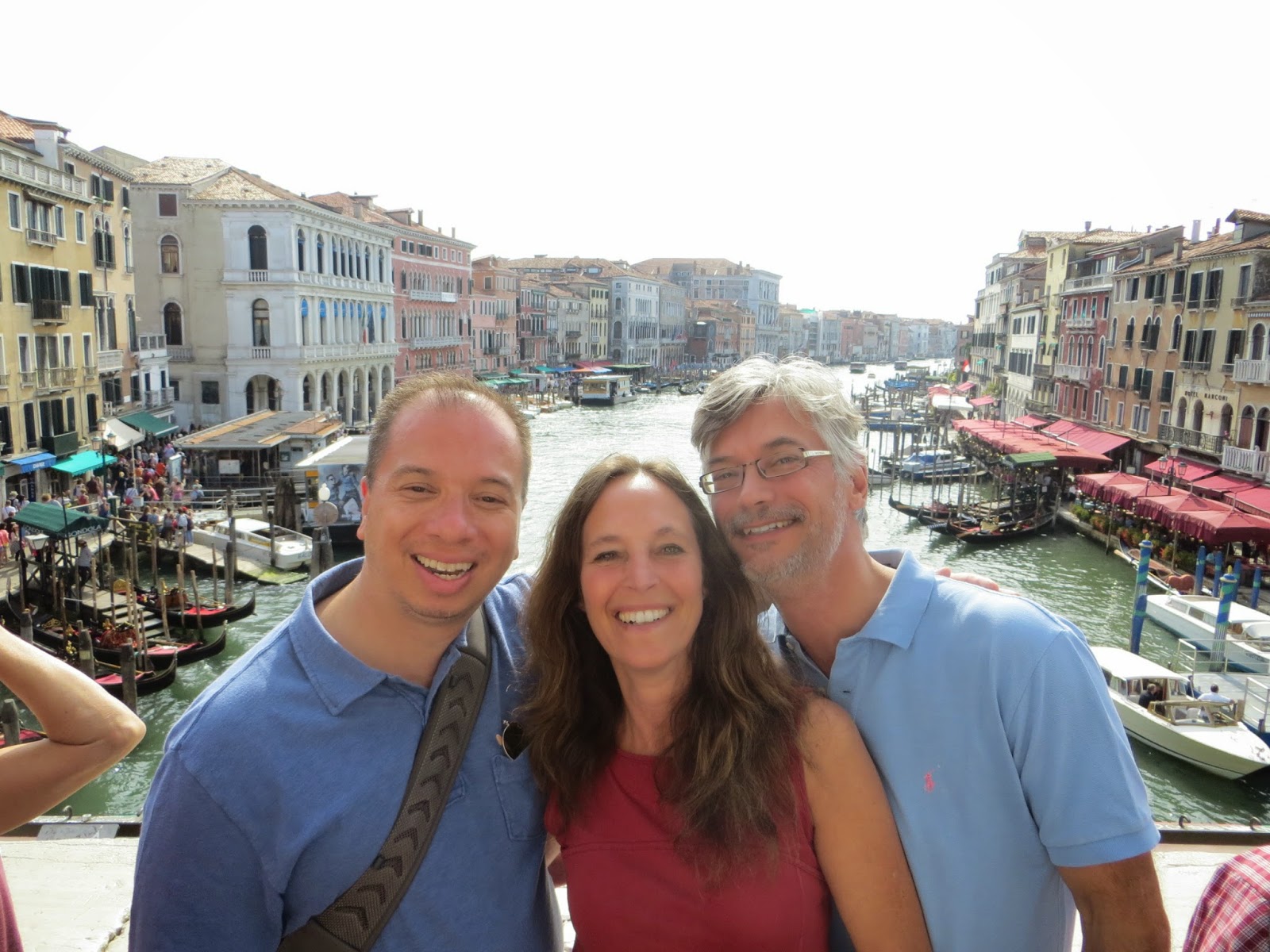 Then we met a lovely older couple at a cafe from Australia (I believe from specifically Melbourne) traveling with their family members, as part of an extended world vacation, before changing to a nearby restaurant for a big lunch, with the mandatory red wine ☺.  At that point, we decided to see a string quartet performance of the Four Seasons near San Marco.  But first a boat trip to some towns north of Venice, specifically Torcello, a sparsely inhabited island with centuries of history and the Cattedrale di Santa Maria Assunta and then off Murano, world-famous for its glassmaking.  We just had =time to do a bit of a stroll around Murano, as we had to get back to Venice for the concert, but it was getting to the late afternoon hours, and the light was perfect for taking some nice pictures.  The Four Seasons string performance was amazing with an incredible young female solo violinist.  And although Marco did notice my head occasional nodding off, I did truly enjoy it as a true musical and cultural experience of Venice.

Day Three in Venice was probably the highlight of my time with Marianne and Marco.  We did another Vaparetto boat trip to Burano, famed for its multi-colored painted homes and buildings in a quaint canal town atmosphere.  I did go a bit crazy with the photography.  An enduring memory of that part of trip is Marianne buying some small glass figures of candy in Burano, and she gave me some, which are placed on an end table in my living room.  I just have to make sure that any friends visiting me don’t try to eat it, if they are drinking and don’t pay enough attention ☺  Finally, the gold standard of all things to do in Venice came next, the Gondola ride!  We found a place to board one near the Hard Rock Café, and Marco and I took our place at the end of a long line of Japanese tourists, but Marianne talked to the Gondola worker at the beginning of the line.  I’m not sure at all at what she said, but before we knew, we were flagged to come forward and moved ahead of the Japanese, and settled into our Gondola.  An almost complete video document of the rise was made with my GoPro camera, and published on YouTube here:  http://www.youtube.com/watch?v=j3fNuhC8zUU  As typical and touristy the Gondola ride may sound, it is a great and fun experience, and well worth the price.  For us, to emerge from a small canal onto the Grand Canal with the vista of the Rialto Bridge in the background was almost too surreal and lovely to describe.
As we all know, all good things must come to end, but before we left the hotel, we went to a historic bar in Venice that we tried to go to before on Day One called Harry’s Bar, reportedly frequented by celebrities such as Ernest Hemingway, Charlie Chaplin, Alfred Hitchcock and Orson Welles.  I certainly considered ourselves in that esteemed category (!), so we had go and have their most famous drink, the Bellini.  We then picked up our bags from the hotel where Marianne gave me a sealed envelope, in which was a truly lovely note to express appreciation of our time together – I’m glad I didn’t read it there, and took a final Vaporetto ride to the Piazzale Roma bus station, where Marianne and Marco would take the bus to the airport, and I would stay in a different hotel in Venice, before my flight to Zurich the next morning.  It was definitely a little sad to say goodbye (I choked up), but we are destined to meet up again for another fun trip soon.  If we want to meet on a new continent, who knows – maybe we can meet in South America or Africa:  any interest in Morocco, South Africa, Brazil or Costa Rica, M&M?

Maybe for long-term goals, yes…  I would be happy to see them soon anywhere, even if it’s in their hometown of Schiedam ☺  Cheers and hugs to my fellow travel enthusiasts M&M, from your enduring friend always….Ray